The hottest thing I never did

I once considered a mixed martial artist with UFC aspirations. He had a beautiful body, was smart as hell and fiercely competitive. 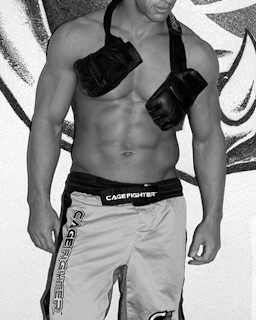 There aren't any other sports that captivate me quite the way the UFC does. Ripped, sweaty men pummeling each other to decide who is the best, the most manly. I love it.

And the thought of watching the fighter engage another man physically ... knowing he wanted to please me ... knowing he sometimes tied his cock with pink ribbon to amuse and entertain me ... it was panty dampening.

I told him I'd wear panties to his fight. And that my panties were sure to get a little more than damp watching him fight.

If he won, he'd get my damp, dirty panties as reward. If he lost, he would not get my panties.

Once upon a time there was a woman who identified as bisexual, dominant and polyamorous. She chose for dates, play partners and lovers only those that understood that she'd probably never be completely monogamous with them. In fact, most that she chose celebrated this about her. Even her uber jealous sub grew to appreciate it.

And then one day that woman woke up and realized she had essentially been monogamous for more than half the year. She had the freedom to be with others but had been too busy and too happy to bother.

She'd also been too busy and too happy to blog.

How the fuck did that happen?

It was nodder's fault. Blame him.

Since I stopped blogging regularly, nodder and I have been apart and back together and now apart again. We've had some incredibly hot scenes I should have written about. We've had some I've even started writing about and stopped because my writing sounded like erotica. We've had the kind of play you fantasize about and it seems unfair to you, my readers, that I haven't written about it.

Consider that your tease. And this blog your denial.

Over the past several months I've been more content than I can remember. I've stayed busy with my career and away from the local scene and all the drama it entails. I've concentrated on my friendships some of which are with lifestylers, some of which that are not. One of which is with a beautiful bisexual woman, Elle, that I don't get to see nearly enough, but overall, I've been very happy.

Up until our relationship ended recently, nodder has been a huge part of that happiness. We'd reached a level of comfort and intimacy with each other that was only exceeded by our D/s connection and it enabled us to play at levels neither of us had before. His appreciation for my dominance and my appreciation for his submission intensified. It wasn't perfect, yet even with him living several hundred miles away we enjoyed each other and our relationship in ways we have not in the two years we've been together.

Between nodder, Elle, my friends and my career, I've stayed so busy and happy, I haven't really sought anyone else. I didn't feel like I needed anyone else.

With this post, I'm rectifying one of those situations. The other? Eh, who knows?