"Ooh looks like you have a little tiny bruise here," I said, touching an area of slightly discolored skin on Hando's shoulder about the size of a dime.

"I told you I get marked easily," he said. He glanced at his shoulder, "That's not very bad though."

"Well, I wasn't trying to leave a mark."

"You should have tried harder."

"Oh really," I said, pleasantly surprised. Or maybe I wasn't all that surprised. Despite his lack of D/s experience, he'd been giving me intermittent subby vibes since we'd met.

"Yeah," he responded with a sigh.

"I could do it again." It was a question, really. It was as close to asking permission as I could get in Domme-mode. And he'd definitely activated my Domme-mode with this line of discussion.

That night, I met him in a dark parking lot behind a breakfast restaurant. As we stood making out between our parked cars, I yanked the neck of his shirt aside looking for the mark I'd made. 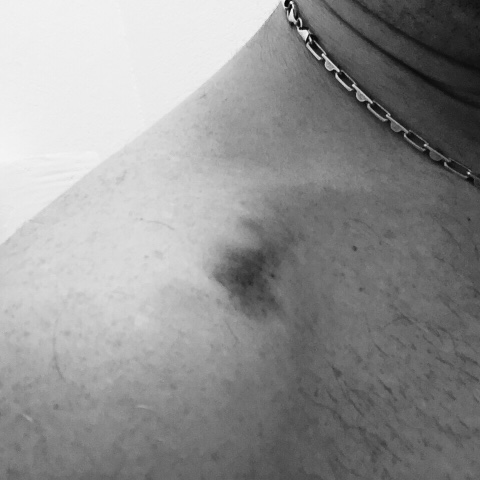 "It's already fading," he said.

"It will hurt," I said, again asking permission without asking.

He moaned in the way that already drove me crazy even though we'd only been seeing each other an impossibly short time. "I know."

I pulled back the neck of his shirt again and kissed the bruised spot gently. "You have to ask for it," I whispered against his skin.

"Please hurt me," he whispered.

And then I did.

"It's still stinging," he said a few minutes later.

"Good," I said. My inner sadist was happy.

"I usually hate it when someone leaves a mark on me. I don't know, why but with you I kind of like it."

"I know why," I said. And then I kissed him hard.
Posted by Mistress Lilyana 2 comments:

I met Hando Likekissinhim expecting to make a new poly friend in March of 2016 but instead found a powerful and instantaneous connection. He's a musician in his mid forties with gorgeous hands who I truly adore kissing. Add to that a few of his references to the Force being strong with me and his alias was born.