I normally enjoy a mouthy sub, particularly one as witty as nodder. Not disrespectfully mouthy but talkative. I almost never impose speech restrictions.

I'd been talking about playing off and on all day but when nodder came to my house that night about a month ago, vanilla activities had prevailed. But I was starting to ache to play. Not from lack of orgasms. I'd had plenty of those. But my post orgasm bliss was starting to melt into a desire to play. Specifically for rope. For him in my rope. 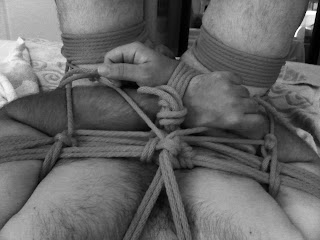 I tied his ankles to his thighs in a frog tie, then his wrists in front of him and created a chest harness. Nodder chatted happily throughout my rigging.

Why he decided to start being a smart ass, I have no idea. He was thoroughly tied and wasn't going anywhere. He wasn't being disrespectful, just annoying.

"Oh my God you need to shut the fuck up."

I blindfolded him thinking losing his sight might quiet him.

I can't even remember what he was talking about but I was just done listening to him. I whipped out my duct tape and slapped a piece across his mouth. He opened his mouth in a yawn and loosened the tape so I added another piece.Then I taped him from his chin to the top of his head on both sides.

And he kept talking. 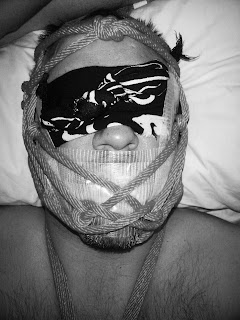 Then I grabbed another piece of rope, channeled my inner Lee Harrington and fashioned some face bondage designed to keep his jaw securely shut.

It worked. Peace and quiet.

I'd chosen to tie nodder as I had with the intent of engaging in some CBT and facesitting and I was not to be deterred simply because little of nodder's face was available for sitting. I knelt over him, my wetness just inches from his nose and watched his cock twitch. Slowly I lowered myself until his nose touched my slit. I felt him try to touch me the only way he could, nuzzling my pussy, and heard him groan in frustration.

I sat firmly on his face and reached for his cock. I stroked it gently, teasingly and waited. I waited for that moment the delicious struggle ensues.

I felt his head turn beneath me trying to find breath and I savored the struggle for a few seconds as his cock became impossibly hard before I lifted my weight off of him, laughing and giddy with power.

Again and again I sat on his face burying his nose in my pussy. I alternated between smacking and squeezing his cock painfully and teasing it with soft touches.

But the real torture was in the fact that he couldn't taste me. He could smell me and feel my wetness on his nose and cheeks but the duct tape and rope prevented more.

Truth be told, it was torture for me too. As much as I enjoy breath control and teasing, I enjoyed nodder's mouth more.

When I could take no more, I slipped the rope from his face and removed the duct tape. Before he could resume his chatter, I kissed him hard and then sat firmly upon his face again.

Like a good boy, his mouth went right to work. And he was mouthy in all the right ways.
Posted by Mistress Lilyana