Four weeks ago I ended an eight month long, on again off again casual dating relationship with my FMT. It was time. I was done being treated badly by him.

I wasn't prepared to feel the loss I experienced. My FMT and I weren't exclusive and we didn't even see each other regularly. The loss I felt didn't make sense to me.

Shortly thereafter we decided to be friends. We've texted and talked a bit, but last night was the first night I've actually seen him since we broke up four weeks ago.

It was billed as an opportunity for my FMT to show me his new home and meet his new dog, but somehow I sensed his flirting was a bit beyond the friendship lines we'd established. I KNEW I was walking into a situation fraught with danger. Danger of things crossing the friendship line.

When I arrived, I did everything I could to avoid looking at him and his new dog provided an excellent opportunity. Then he had to show me around the house, of course. Then there was the search for a wine bottle opener. Then there was no activity left, no way to avoid sitting on the sofa together.

Within moments his hands were on me. I brushed them aside and scolded him.

"And you don't let friends touch your leg?"

"Why can't I pinch your nipple?"

"And you don't let friends pinch your nipple?"

"NO!" (This would not be entirely true. I do allow hot women friends to pinch my nipples but that's a different blog)

Conversations like this peppered the evening in between rounds of him aggravating me - my FMT's favorite sport. I moved his hand off of various parts of my body over and over. And then a few times I left it somewhere fairly harmless.

I mean really. Can I totally blame him for trying to touch me? I was looking far too hot to be seeing someone I used to date.

He leaned in for a kiss and managed to catch himself. THAT amused me more than the smart ass remark he fired off about me not wanting him to kiss me.

After splitting a bottle of wine, I did relax enough and allow myself to cuddle up to him. This was after he'd tried about four times to get his arms around me. Within moments on putting my head on his chest, I could feel him breathing a bit faster and hear his heart rate increase.

I almost got up and left right then, I swear. Instead I smirked and enjoyed it and perhaps even let a sigh or two escape.

When I did leave, I couldn't resist giving my FMT a gigantic hug. A long hug. Of course when I ended the hug I turned quickly and made me way to my car and avoided looking at him.

I can't remember what my FMT said as I got into my car. It was antagonistic and suggestive of me leaving with things unfinished. I wish I could remember what it was.

Whatever he said, it had me out of my car seat and kissing him in a split second.

I did manage to tear myself away and go home after that. I'm quite proud of myself and my ability to have driven away when I KNOW I could have raced him for his bed leaving a trail of clothes across his new house. Hell, I'd still probably be there christening each room.

But I drove away thinking, "Clearly we are not done." 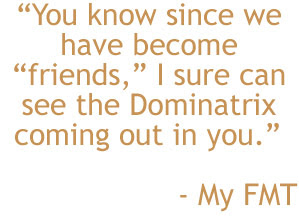 I find it amusing that he's noting this now. Perhaps it's because I spent the evening in control. I pushed off his advances until I was ready. I asked him to pour the wine when I was thirsty and make me food when I was hungry. And I kissed him on MY own terms (even if he goaded me into it).

I have no idea what will happen with my FMT and me. He's got some issues he needs to address within himelf before he's ready to date anyone again. And it'll take me a while before I'm ready to believe he can date me without being an ass to me.

What I do know is that he's met the real Lilyana now, the one who's always in control. Well usually anyway. ;) And Lilyana doesn't take shit from him or anyone.

I'm not sure he'll like this Lilyana in the long run, but clearly he finds her irresistible now.
Posted by Mistress Lilyana