Sir, please get on your hands and knees - by last ass bender

One of my twitter followers, @LastAssBender, contacted me to let me know how inspired he was by my blog, Smart Boys with Waxed Assholes. I hope you enjoy this story about his adventures in waxing. - Mistress Lilyana

I am a straight guy in my mid twenties. Like most men I know, I am pretty demanding in my job, I am tough, I don't overdo it, it is just the way I am. I am a man's man.

Six months ago, my girlfriend and I broke up after a year of dating. To date, this has been the most sexually submissive in a relationship, one that saw many sexual experiments and pushed further my limits.

After the break-up, I will admit, I have been feeling the withdrawal symptoms of the sexual humiliation. I had never felt this before, not after the termination of other relationships that involved that kind of play. But now, I feel like a ravaged dog, who can't have enough.

So a couple of months ago I go on twitter, discovering this new tool of socializing, and I start following many people, and among which one stuck out, Mistress Lilyana. I started reading her blog and I thought, this is the kind of domination I like, perhaps not the forced bi stuff, but I am truly digging this! 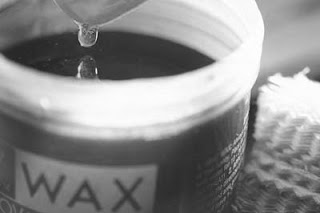 Then one day, she posted something, something that made me shiver and drool. Her Smart Boys with Waxed Assholes just triggered a buried desire in me. I recalled when my ex-girlfriend asked me several times to get a "deep bikini waxing" and I adamantly refused even though secretly I have masturbated about her request hundreds of times.

Reading Mistress Lilyana's blog made me realize that I had to do it, at least for myself. So one morning I mustered up the courage and decided to start calling local waxing places.

Some of the responses I got were so humiliating, maybe not in what was said but the change in the tone of voice was enough to make me wish I had never called, but I continued calling. Finally, I found a place that heard my manly voice and said yes we can give you an appointment. I was ecstatic!

The next day, I left work, got in my car and rushed to my 5:30 PM appointment. I got to the place, parked the car and sat there for a minute. I had second thoughts, doubts and fears. Somehow I mustered enough courage to go in.

I walked in and was greeted by the receptionist who asked me if I had an appointment. I gave her the time of the appointment and the name of the woman who was supposed to rid me of my pubic hairs. She seemed confused but not too concerned.

My humiliator came along and looked at me and in broken English loudly announced, "No! I cannot do this! I only wax women." The entire place stopped, turned and looked at us. I ran out.

Driving my car away I was so angry and felt emotions beyond humiliation. Surprisingly enough, I was now more determined to get this done so I got on my phone and started checking listings. Along the search I saw a listing for a place that offered "Male deep bikini waxing." I called them and asked if I could come in immediately.

25 minutes later I walked into the salon where three women are sitting casually reading magazines. They glanced at me without much interest and went back to the fashion tips and the dieting suggestions. It was only when the young Indian woman that ran the place came out of the operations room and said, "You must be the guy who called for the bikini waxing," that their eyes lit up with curiosity. I tried to ignore it. Maybe it was partially in my head.

I walked in the room where the lady asked me to get undressed, bottomless and keep my shirt on. After she left, I took off my jeans and my boxers and lay down on the bench bare to the world. Then she came back into the room.


"So what are we doing today?"

"Well, do want just your bikini area? Do you want a deep waxing? No legs or arms?"

"No just the bikini area, but what is the deep waxing? Sorry it is my first time."

"Oh, that's ok. Deep is when we get deep between your cheeks."


"Next time try to trim your hair a little bit, it will hurt less."

"Oh yeah? (clinch) Is that why it is hurting so much?"

"Well, yes and no, its also because you have sensitive skin and you seem like a cry baby."(giggles)

"Oh, I guess I don't take pain too well, especially down there."

"You will get used to it. I am assuming this won't be your last time."

"It won't be, I don't think. Most guys come the first time, they leave mortified because of the pain and then they come back. It just feels so good and clean you know?" (yank)

After a few torturous minutes, my cock and balls were as hairless as young boy's private parts. Now came the really humiliating part.


"Ok, we are done with the front. Now I need you to get on your hands and knees."

"Excellent. I need you to put your face down on the pillow and lift your behind up in the air. Also, I need you to use your hands to spread your cheeks." 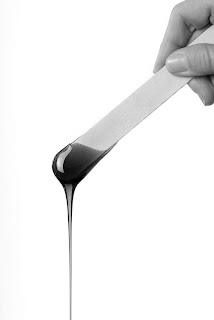 And here I was, face on a pillow, on my knees, bottomless with arms reaching back to spread my ass to a woman that I have never met that was about to wax my asshole.

She proceeded to do her job, placing hot wax all over my ass and I couldn't help to be a bit turned on. I tried so hard to focus on not getting hard and I did not. Then in the midst of the small talk she said something that I never expected to her.


"Huh, now if I see you on the street I will not recognize you. You will have to bend over for me to know who you are."

I was shocked, ridiculed and did not know what to say. So I just laughed.

I was so sore. I put on my clothes and went out to the register in the lobby where there were women waiting their turns to get waxed.

I looked around and saw her clients staring at me, at us, hearing her words to me awaiting my response. I was frozen and for once in my life so shy in a public situation.


"Alright then, I will book you for your next waxing in 4-5 weeks. You don't want the hair down there to get too long or else it will hurt as much as this time."

I just nodded my head in agreement.
Posted by Mistress Lilyana