I have a list of rules I give submissives. It includes instructions on how to address me and greet me in both public and private, grooming and fitness/maintenance guidelines, as well as expectations for behavior.

One thing you might find out of place is rule #13. "Do not place your feet or toes anywhere on my body, ever."

I have what you might call an anti-fetish when it comes to feet. I can't handle anyone's toes on me. It literally makes me nauseous. No joke.


As open minded as I am, it's a still little difficult for me to understand someone's fascination with feet. They're enclosed in a damp dark shoe all day or, worse, open to the grime and dirt they encounter when bare or in sandals. Eww.

I actually do understand the humiliation aspect of it. I really enjoy making a boy kneel on the floor and kiss my feet as a show of their submission. Better yet is to have them kneel and beg to kiss my feet. It was very hot for me from a power exchange perspective but that was about it for me.

That changed last week for me.

Last summer I briefly dated and considered a boy I refer to as chewtoy. Even though I didn't go "full Domme" on him during our play session, I still managed to overwhelm him. After some time, we discussed things and it was clearly evident he's not truly submissive. He does, however, have some typically submissive fetishes, such as being bitten (hence his nickname), and a desire to be topped in bed.

Chewtoy also has a foot and shoe, more specifically boot fetish.We've remained in contact since we played and I kind of mentor him, or at least try to answer his questions about the lifestyle. He's even bottomed for me in rope class. 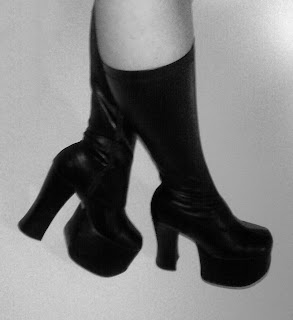 A couple of months ago he'd given me a pair of very fun platform boots he'd purchased for a project (pictured right). I'd strutted about (ok maybe a wobbled - I'm not used to platforms) while chewtoy grinned approvingly and told me hot they looked on me.

I knew from previous conversations we'd had that chewtoy enjoyed fetish wear, shoes especially, yet I was still a bit surprised when he contacted me before Christmas saying he'd purchased another pair of hot boots. He asked me if I'd wear them for him. Actually he was very specific. He wanted me to wear them for him without socks for a few hours, tie him up and make him smell.

Um yeah other than the tying up part, I really didn't get what he was going for. I tried to tie in the smelly boots with some kind of humiliation I had yet to inflict upon a sub, but quite frankly, I was grasping at straws struggling to connect what he envisioned with something that appealed to me.

Then last week chewtoy just happened to call at the perfect moment. Fresh from the break up with my FMT, and moments after a bad first date, I was feeling dangerous and ready to play.

A few beers later I was lacing up the very hot patent leather boots he'd bought and then modeling them in my panties and sweater. 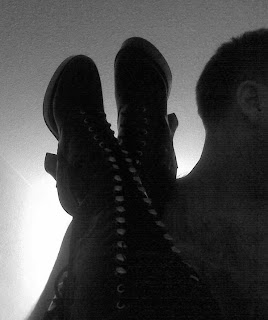 Later, as I lay on his bed with my legs in the air admiring my footwear, chew toy began kissing the shiny black boots in a very sensual way. He put his cheek against their smoothness and closed his eyes blissfully. He licked them like they were a delicious treat. Chewtoy was in heaven.

Another aspect that surprised me was that I could actually feel many of his kisses and licks through the boot. In regards to hotness, that was right up there with when a guy bites my nipple through my bra or breathes on my pussy while I'm wearing panties. HOT.

I've never really researched boot and foot worship, so if you're a purist and there's some kind of protocol for this kind of thing, give me a break here. I'm new to this and so is he. We just went with what felt good and natural and as with any good scene, it evolved naturally.

What it evolved into was some very hot sex featuring me in nothing but a black lace bra and the boots you see above. My flexibility really came in handy for being able to appreciate the sexiness of my boots while enjoying everything else.

Afterward I slowly took off the boots to reveal one foot, then the other. Chewtoy marveled at how warm, damp and soft my feet were after a few hours in the boots. Before I knew he was kissing and licking each toe and enjoying my entire foot.

Before this experience, I'd have cringed at the idea that someone wanted to lick my sweaty feet. But yet as I watched chewtoy savor and enjoy each toe, I realized it was hot for me. Very very hot. And I want more.
Posted by Mistress Lilyana