The following blog was written by my femsub, sindi, who I often refer to as "the girl." My simple assignment, to buy a butt plug, turned into a hilarious adventure that I felt could be chronicled best by sindi herself. This is part 3 of 3. Be sure to read part 1 and part 2 if you haven't already.

Down to the last few days before my trip to Vegas, I was now desperate to complete my assignment. I was determined not to be a cumboy.

The next day I got an early start on my work day so that I could spend the last part of the day continuing the search. By now, I wasn’t too keen on the idea of settling. If I was going to spend this much time looking for ass adornment for my Mistress, I might as well get the one we both wanted.

I Googled “adult sex toys” along with the name of the Phoenix area I planned to be in, finding a list of three stores highlighted at the top of the list. One was another location of the chain store I had visited the previous day, another was listed as a “Superstore,” and the other was a business with a goofy name like “Sensual Pleasures.”

I plugged all three addresses into my GPS and got rolling. I hit the chain store first. Again, as I walking through the door, a male clerk greeted me with a loud “Hi Honey.”

Wow. What a way to make all your female customers feel like hookers, I thought. The people making up that policy must be the same men who are stocking these stores with small and extra small lingerie.

I walked straight to the butt plug section and perused the selection among a group of men who probably got no greeting at the door at all. Again, there was the same selection of huge plugs in every color imaginable, but no metal plugs, much less jeweled metal ones.

With no time to lose I headed out to the “Superstore” optimistic that I would at least have more of a selection to see there. Thirty minutes later I found myself in a business park, the promising Superstore nowhere to be found, among people who probably wouldn’t know a butt plug if they tripped on one. I called the number and listened to a recording of a man directing customers to the businesses website before hanging up the call. Ugh!

I left and headed to the third address. It was a home in a residential neighborhood. I called the number and got a person’s voicemail on which the speaker mentioned nothing about sex toys. Unbelievable.

For a second I actually contemplated walking up to the door and asking whoever answered if they had any jeweled metal butt plugs for sale. Nah.

Frustrated, I Googled stores in the entire Phoenix metropolitan area. My search turned up a store near the ritzy Scottsdale area that I had not seen before. Of course! If any store was going to sell booty bling, it would be for all those rich assholes in Scottsdale, Arizona, literally speaking of course.

I called the number. When the girl answered I blurted out, “Do you have the jeweled metal butt plug?”

Without hesitation she replied, “Yes I do. I have two left.”

“I’m on my way,” I told her, a tear of joy actually welling in my eye.

I called my Mistress and relayed my story of frustration and happiness. I suggested that if she chose to blog about this assignment, she should include a Google map of all the places I went in search of the elusive bejeweled butt plug. She laughed and then immediately saddled me with this blog assignment. I told her I was headed to the store and she instructed me take a picture of the plug and send it to her once I got there.

As I entered the store a beautiful young Hispanic woman approached me and before she could ask me if I needed help I asked, “Where’re the jeweled metal butt plugs?”

She smiled, as did her male partner behind the counter, and few customers walking around the store. “Those things are soooo popular,” she said, still smiling at me. She led me to the center of the store where a glass case displayed the two remaining plugs, glittering under the display light.

Opening the case for me, she informed me that the owner had purchased 10 of the plugs just before Valentines Day, and they had sold eight within a matter of days. I told her I believed her, and relayed a little of my efforts to find one.

The two plugs that were left had a ruby and aurora borealis stones. She picked up the plugs and put them in my eager hands. I marveled at the stones a bit before asking her to display them on the counter for me so that I could take a picture. “It’s for my Mistress, “I informed her. “She instructed me to buy one of these so that she could use it on me.”

“Oh you naughty girl,” my beautiful salesgirl exclaimed with a full smile. 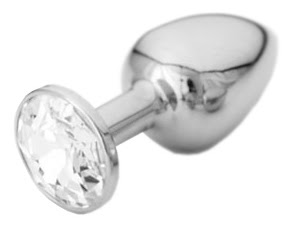 I snapped a few pictures, with the help of my salesgirl, and then sent them to my Mistress who called me seconds later exclaiming, “It’s gorgeous!” A few minutes later we decided on the aurora borealis stone, and my salesgirl was ringing me up.

“Yeah,” she said, “Sometimes I ask my boyfriend to pull my hair when we are having sex. He just says ‘No, I don’t want to hurt you.’”


Excited still, I stepped into my car, thoroughly satisfied with the joy I knew my Mistress had experienced from my diligent efforts that had just led to the spectacular completion of my assignment. I smiled as I started my car, thinking of her voice, praising me on the phone minutes before.

Still, I knew I wasn't finished. There was something else I really needed to do. Just for me.

Unable to restrain myself, I broke my safe driving rule and began texting my Mistress while driving 65 mph on the congested I-10 freeway.

"You tell that cumboy," I continued, hardly able to text and drive as I was also in a fit of genuine, gleeful laughter.

"Tell him," I continued.