9 broke things off this morning. He has reconnected with an ex girlfriend he still has feelings for and wants to pursue things with her. She's not poly or in the lifestyle so he feels he needs to walk away from me and the lifestyle in order to be with her.

To an extent, I understand this. I've recently reconnected with my FMT, the vanilla guy I dated off and on last year. I had intended to explore things with him even before 9 broke things off so I totally get that he feels the same. I wouldn't have ended things with 9 to do it, but I didn't have to. Having an open relationship allows you certain flexibilities like that. 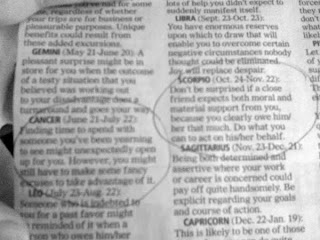 But back to this morning.

I was stunned that less than a week after we declared ourselves in an open relationship 9 was breaking things off. Immediately after our conversation, one of my main thoughts was "I don't want to be alone right now." Some people need to be alone in times like this. I need people.

I knew my FMT wasn't working. I called him up and asked him if I could spend the day with him. He agreed.

It was a dangerous idea. It was reckless and I knew it and I went there anyway. When we were together our chemistry was epic and I correctly assumed it hadn't diminished sufficiently in the five months we've been apart so of course we ended up in bed.

But alas, this blog is NOT about hot reunion sex with my FMT. It's about horoscopes.

I hadn't been there long when my FMT told me to check the newspaper for his horoscope.

"You're not going to believe what it said," he told me.

I fumbled through the paper until I found it:


Don't be surprised if a close friend expects both moral and material support from you because clearly owe him/her that much. Do what you can on his/her behalf.

I looked up and him with big eyes, "Oh my God." Then I laughed, "YES you totally DO owe me!"

"Yes, I know," my FMT admitted. Part of the reason he wanted to reconnect with me was to apologize for the way he treated me while we together, in particular, for our break up.

Then I joked, "Damn I should be asking you for money too!"

Then I found mine:


Finding time to spend with someone you've been yearning to see might unexpectedly open up for you. However, you might still have to make some fancy excuses to take advantage of it.

"Oh whatever," I tried to laugh it off. Then only slightly more seriously, "You already knew I wanted to see you."

It appears the stars were aligned perfectly for my FMT and I to spend time together today. On the heels of a break up with 9, one might even go so far as to say it's some kind of sign my FMT and I should be together.

I'm grateful we've reconnected. I'm grateful he was there for me today as a friend. I'm super grateful for the hot reunion sex.

What does the future hold for my FMT and me? We've settled on a FWB (friends with benefits) relationship. It's worked for us before. But will it work for us again? Only the stars know.

Email ThisBlogThis!Share to TwitterShare to FacebookShare to Pinterest
Topics: 9, dating, my FMT, polyamory