Is he submissive or just kinky?

Last fall I was contacted via collarme by a good looking, in shape boy in his mid thirties. In his very first email he explained his (one and only) submissive fantasy. He was looking for someone who would "own" his orgasm. Someone who would have him come over to their place, spit on him and tell him he is impotent without them. This spit should be induced by Jolly Ranchers, by the way. 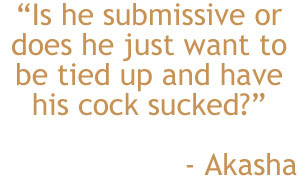 I'm not kidding you.

We corresponded briefly as I tried to explore other submissive types of activities with him to gauge his interest. He flatly refused to consider anything else except strap on play to which he said, "Yes, I guess I'd be ok with you taking my ass every now and then."

I didn't realize it then, but when I ran across him a couple of months ago again, I instantly realized it: he simply has kinky fantasies. He is in no way submissive because he has no desire to please me, only satisfy his own kinks.

At first it was difficult to differentiate between the two but now I can tell fairly easily. In the case of "How NOT to win my heart and earn my attention," I suspected in the very first email that the boy was not submissive and simply entertained kinky fantasies.

The following are snippets from actual messages I've received that indicate a desire for fetish, not submission:

I am writing because you sounded open, honest, and willing to give and take. Some things you are interested in and some things I am. I also look for things that I would like to explore like queening. I look at photo's on the internet and I would like to try it full body weight. As your actual chair. Could I really breath? Won't know till I try. I also think about actually drinking pee. Don't know if you are open to this or not.

He's managed to say "I" nine times in just one paragraph. In this first correspondence he's telling me all about what he wants and nothing about fulfilling my desires.

Like I said in my first letter. I will do things for you and you some for me. I would be willing to take you places, shows, dinner, ball games, comedy clubs. Just have fun. In return you use me as your furniture, worship your body, toilet for urine.

Oh gee thanks! He's willing to take me places HE wants to go in exchange for me doing the things to HIM that HE desires.

On the other hand, here are messages that give me clear indication that the sender is truly submissive:

I have discovered that serving a stronger and more powerful Mistress is my escape and desire. I am totally compliant in her control, giving all I can to please and totally surrendering all my power to her to use in any way.

This boy not only understands submission, he can articulate what it means to him and that is SO hot!

To me submission is mainly mental ... the high end punishment is beyond what I desire. Do not get me wrong, I do enjoy spanking, nipple play, some restraints, but to me, it cannot just "be" that. Rather the emotional and mental application is far more powerful to me. I need a strong bond of attachment and am open to "anything" that brings you pleasure and delight, whether it is physical, sexual, or emotional.

In my opinion, anything less is simply kinky desire.
Posted by Mistress Lilyana